Today I was configuring a Virtual Machine with TFS 2010, as some of my clients want to integrate it with the PMO and using it together with Project Server 2010, SharePoint 2010 and Visual Studio 2010.

This is a very common combo as in many companies they have a PMO (Project Management Office) where they are tracking all the projects committed in the company using MS Project and Project Server as EPM. SharePoint in these scenarios is a critical tool as it will show all the reports related not only with the project management but also with the development progress, thanks to the integration with TFS 2010.

The trick is how to combine PS and TFS together to link the management with the development and how to leverage SharePoint to gather all the reports we need about both. But not only that, from the Project Server Web Access, you also will be able to approve changes on the product backglog, control the timesheets and how these changes that come from Visual Studio can affect to your project planning and reflect them automatically on MS Project.

But step by step, let’s start by the TFS 2010 installation and for now let’s take a look to the different topologies that we can find when we are facing these scenarios: 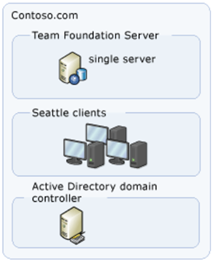 So the final configuration would be something like this:

The installation process for TFS is so straight forward. Just let me share two guides with you before I go through the process:

I highly recommend to install the respective Service Packs:

There are a lot of tools and software to install, of course my first recommendation would be to acquire Team Foundation Server 2013 for several reasons (main one are integration, capabilities, templates, reports,…), but still there are many customers out there with TFS2010 and a lot of CALs, and it is a very good product, despite is 4 years old. The greatness of TFS is the integration, doesn’t work alone, it integrates completely with Project Server, with SharePoint, with SQL Server, with Visual Studio, MS Project, MS Excel and not only with Microsoft Technologies but also with Eclipse, XCode, GIT…

I recommend to take a look to this video from Channel 9 where you can see all the power of TFS 2010 in action, called Microsoft Project Server 2010 and Microsoft TFS 2010, better together: http://channel9.msdn.com/Events/TechEd/NorthAmerica/2011/OSP203 (video).

That’s all for now, just let me drop you below some recommended installs for the scenario.

See you next time!

In the Application tier we would need:

Team Foundation Server 2010 RTM with the following updates installed in the correct order:

In the Database tier, SQL Server 2008 Service Pack 1 (or TFS installation will block you).

The MSSCCI Provider allows non-Microsoft tools to connect to TFS:

Team Explorer Everywhere (TEE) is an Eclipse IDE/Java implementation of the TFS client:

If you work in a cross-platform environment, you may also want to install the build extensions that allow you to execute Ant or Maven 2 builds and publish any JUnit test results back to TFS.

If the scenario also includes Project Server, is highly recommended to install the Feature Pack for Visual Studio Team Foundation Server and Project Server Integration, only available through MSDN Suscriptions..

Technical Evangelist and good guy
View all posts by Eduardo Ortega Bermejo →
This entry was posted in TFS. Bookmark the permalink.